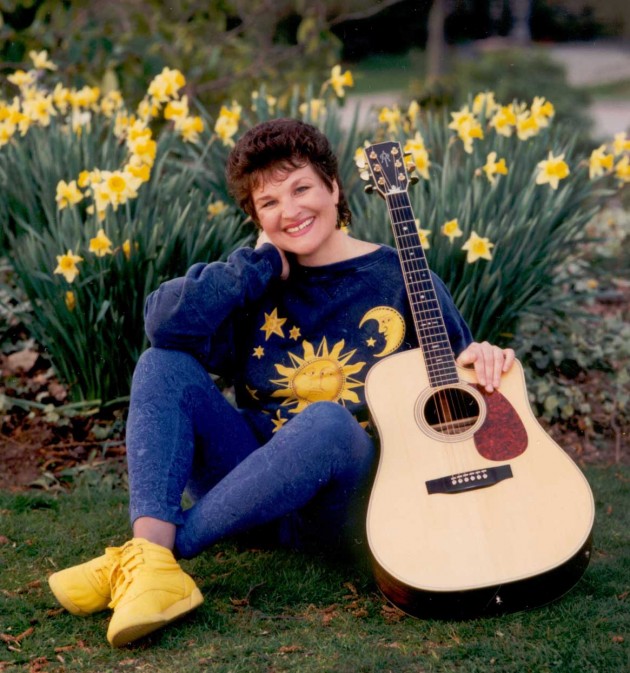 Read up on the latest news and reviews from others regarding Charlotte Diamond, her music and concerts!

Charlotte Diamond Appointed to the Order of Canada 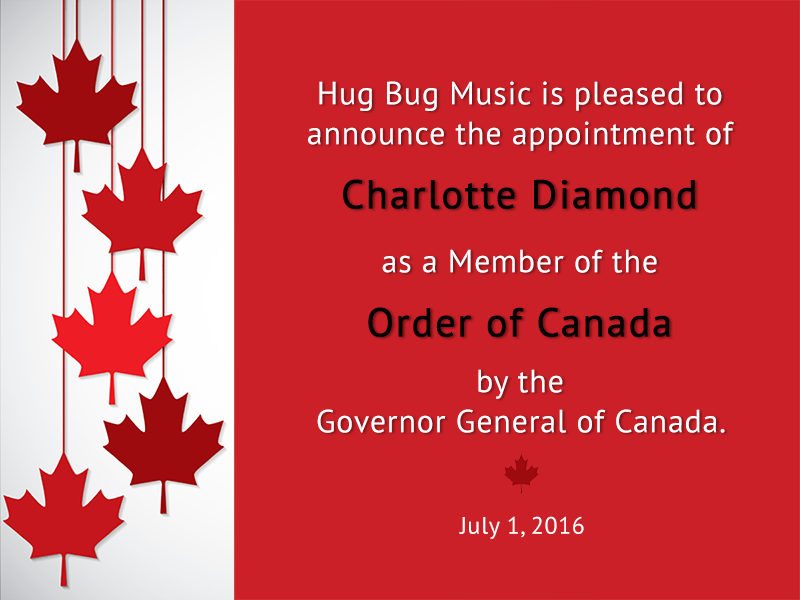 Over the past 30 years, Charlotte Diamond has made an enduring contribution to Canadian children’s music. A singer, songwriter and entertainer, she has engaged children with her gentle melodies and catchy tunes that get them singing, dancing and learning. Her understanding of how music and lyrics are foundational to literacy has also helped teachers, as she has produced learning guides that focus on brain development and language patterns in young learners. An ambassador for UNICEF, she continues to perform for audiences of all ages.

For more information, please visit the website of the Governor General of Canada:

“Canada Day was a very special day for me,” Charlotte said. “Wearing my pin for the Order of Canada and performing with Lee Oliphant for the families at the Steveston Salmon Festival in Richmond. Singing “Leave the World a Little Better”and “May There Always be Sunshine” expressed the deeper feelings I have for my country, Canada, and our world. Thanks so much to all of my friends and fans for your support of my music through the years.”

(Videos will open in a new browser window.) 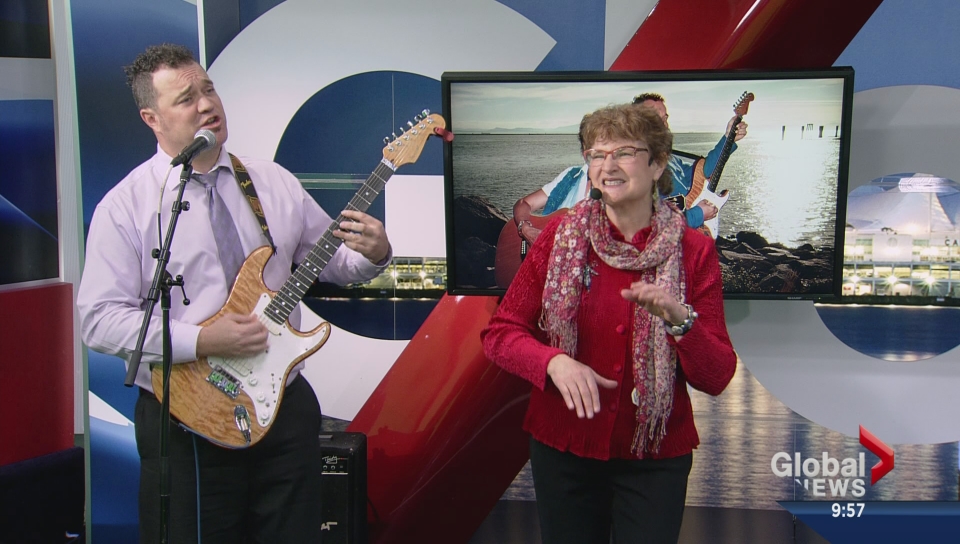 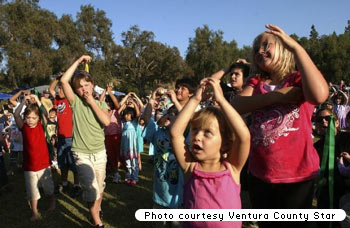 Kids emulate Charlotte Diamond, a singer, songwriter, storyteller and musician at a free concert in Arroyo Vista Community Park in Moorpark on Saturday. Songs include “I Am a Pizza” and “I Wanna Be a Dog.”

This was by far our best concert. Charlotte was amazing! We estimated over 1300 people attended. The feeling of caring, family and community that Charlotte created was unbelievable!

Bay Area is a regular stop on Diamond’s Calendar “…legendary children’s singer-songwriter, Charlotte Diamond, has been performing for nearly 25 years. Her songs, such as “Four Hugs a Day,” “Dicky Dinosaur” and “I am a Pizza” are as recognizable to fans as her ever-present smile. And through her workshops and keynote speeches, Diamond remains a point of reference for today’s generation of teachers as well.

(My association with California, in particular with the Linden Tree Bookstore in Los Altos, goes back to when I first started. – CD)

Thank you for all you do for children and Early Childhood teachers. You are such a generous and kind person! And so much fun! My teachers came back and used your ideas on Monday morning already!

The children saw a goose in the parking lot and made up a goose song to “I am a Pizza.” (As suggested in your Keynote address)

Thanks again for showing your love for children and sharing it with all of us in South Dakota. 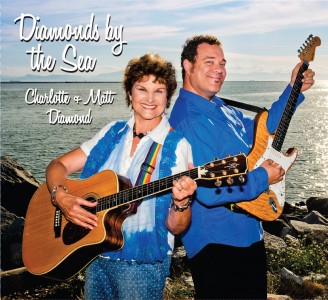 This is Charlotte Diamond’s 14th album and children will be delighted by the variety of new songs written and performed by Diamond and her son Matt. There are nineteen short songs and a booklet of lyrics is included with the CD. According to the website, there is also a CD of band tracks available so teachers can play the music and have their students supply the vocals. Two of the songs are in French, one is in Spanish and the rest have English lyrics. Playing time from start to finish is 50 minutes. A list of song titles is available on the website. (https://charlottediamond.com)

Most songs are up-beat, happy and bouncy but there are a couple of quieter, slower numbers which make a good change of pace. The CD includes local musicians, a children’s choir from BC’s Sunshine Coast and a wide variety of instruments. The words are simple and the tunes are catchy so even quite young children could soon sing along.

The themes include water, wildlife and family, stressing caring both for the environment and for each other. The music would fit in well with a unit about the environment or around the celebration of Earth Day in April. Many of the songs lend themselves to adding actions and/or dancing so there is a chance for children to get out of their seats in the classroom and have some fun moving around. The website offers a teachers’ corner for educators interested in making use of the CD with their students.

“If, this season, you hear children bouncing around the house singing, “Ottie the otter … doing what an otter ought to do” you will know they have been touched by Charlotte Diamond.”
– Coast Reporter, BC, Canada – Diamonds sparkle on new kids’ CD Charlotte Diamond’s silly song about hungry ocean creatures comes alive in this board book set under the oceans of Hawaii. The text includes all the words from Diamond’s (Octopus) Slippery Fish song, including the whale burp at the end, plus there are appearances by a variety of incandescent coloured sea animals not mentioned in the song such as a turtle, jellyfish and eels. These “extras” serve only as background detail; they are not characters in the song. As the stars of the story are eaten, first the slippery fish, then the octopus, tuna fish and shark, the open mouths of the animals appear as black silhouettes on the side of the page. When the humongous whale burps at the end of his meal, all the animals that were previously eaten in the song come tumbling out of his mouth.

This story could be used with the song, or read on its own. There are actions that go with the song, not included in the book, but they can be found on Youtube, or made up by the children listening to the story. I know this book will be popular at our public library because many of the parents, teachers, and children love this song. 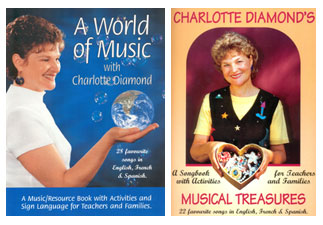 Every once in a while I come across something new that makes me become excited about being a music teacher. The music and voice of Charlotte Diamond is just that. As I explore her [Music] books, I’ve found several songs that I’m going to use with my Children’s Chorus at New York University. I guarantee that you’ll enjoy the books, the recordings and her new DVD’s as much as I have. This material is a winner!! 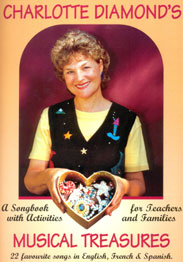 This book would be a wonderful addition for any classroom teacher, music teacher or parent. The book contains simple (Grade 3-4) piano arrangements, vocal scores and guitar chords for all songs. The music is up-beat, easy to play and easy to sing. 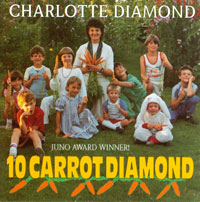 Family performer, Charlotte Diamond, takes young listeners around the globe and into their own imaginations. 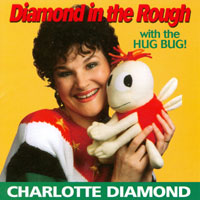 She has the knack for capturing feelings and concerns of tykes. She is also blessed with a keen sense of fun.

Diamond has one of the prettiest voices in the Canadian kid’s entertainment field. 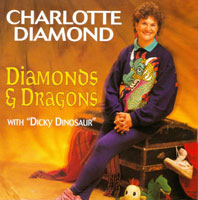 You can’t help but be charmed by Diamond’s straight-ahead, tuneful approach to entertainment. One of the big favourites is the crowd-pleasing ‘Dicky Dinosaur.’ The personable Vancouver singer offers families an eclectic seasonal treat, with the lilting purity of voice that is her trademark.

One of the finest Canadian family albums to come along in years. 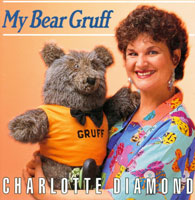 Tots are sure to enjoy the title song about Gruff, a bear who’s ‘not very handsome, but handsome enough.’

A whimsical look at life and nature. ‘Procrastination’ and ‘No More Dishes’ will also appeal to parents of teens. 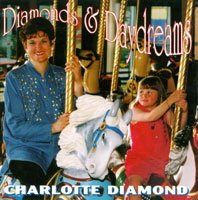 A good antidote for wound-up kids.

An enchanting collection of original songs and traditional lullabies. ‘One Dream’ may remind some people of Martin Luther’s famous speech.

No wonder Charlotte continues to be successful, she knows what’s needed to make it work: Love and Music. 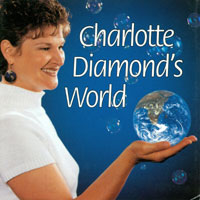 As always, outstanding production. She is one of our very own treasures.

Charlotte Diamond has opened up a whole world of new music for children. The clarity of Charlotte Diamond’s lyrics in French makes her songs ‘easy to sing.’ 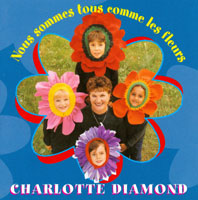 Wholesome and fun, Diamond’s songs range from parent-child relations and human diversity to the silly side with ‘Soy una pizza’ (I am a Pizza).

Singer Charlotte Diamond cooks up a treat for kids. Parents who are looking for a new and novel way of teaching their children a new language and broadening their cultural horizons now have another tool…Charlotte Diamond’s Music. 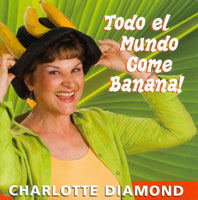 You can’t help but be charmed by Diamond’s straight-forward tuneful approach to entertainment.